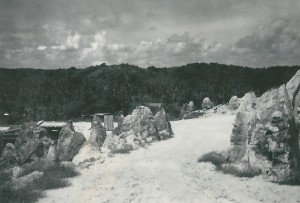 The next letter  to my grandfather was different and the tone changed.This was a man to man letter. The language was looser, less formal. He described the hardship; hacking at bush; of sweat and dirt; the mining and how it worked; of cableways; crushers, dryers and storage bins and pinnacles of phospate. It was a dry, harsh landscape and it sounded less than tropical island idyllic.

In contrast the next letter to my grandmother talked about his broken watch which he was sending back to her to organize repair. He told her of listening to the amateur hour and about his housemate. He mentioned that he’d cut his leg falling on some steps some weeks prior; that it had become infected and that he had gone to hospital for a few days. He told his mother not to panic, “The leg is quite ok now, so don’t go worrying.”

What a bombshell that must have been. She found out well after the fact.What must she have been thinking. Like most mothers she would have worried. Isn’t it built in as soon as you’ve conceived? If a child tells you not to worry, that’s when you worry. I’m surprised he confessed. But was this because there were bigger issues brewing on the island?

This was a pattern in his behaviour that I recognised. Even when he was sick and in his last days he didn’t want any fuss and tried to hide the reality of his predictament from his family.

I wondered what else he was leaving out.