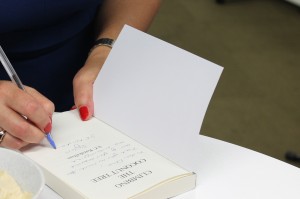 The date was set and the venue sorted. I ordered copies of my book for selling and signing on the night. So who to invite. I scrutinised my email list, phone contacts, Facebook friends, colleagues, neighbours and the word spread. Before long the list was over one hundred attendees.

The night was approaching. I had to prepare what I was going to say. I hate long speeches but I knew that the story about this book needed to be told – much like this blog site only a tad shorter. There were so many people to thank. You might think that writing a book is done on your own but there were over twenty people who had helped in some form or another. So you see a writer’s life is not so alone – anyway not for me.

Everything was organised. It began to rain after weeks of dry, hot weather. The roads were a mess but soon they came in their droves – well, maybe two’s and threes. My brother Andrew, surprised me by travelling from Sydney; my friend, Karen flew in from Adelaide.

No doubt many were curious about a person who had reinvented herself as a writer- banker no more. But in the end it was a great excuse to get people together – some who hadn’t seen each other for years. I wasn’t nervous. If I was going to stumble, then better it to be into the arms of supportive friends and family.

I was swept up by the excitement. Only I felt removed from the author tag. It was almost like it wasn’t my book but someone else’s. What was everyone congratulating me for? Why the clamour for my very long signature?

I guess it takes a while to get used to the tag – I’m an author. Mmm…it sounds rather good.

12 thoughts on “I Launched my Book”