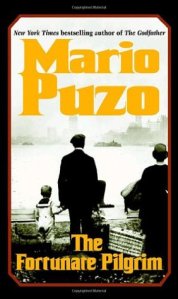 It feels good to go back in time and read a classic. I read The Godfather by Mario Puzo many years ago and indeed it is a classic. The Fortunate Pilgrim, written before The Godfather and published in 1965 is no less so. But unlike The Godfather, The Last Don and many of Puzo’s legendary novels centred around men, this book is about an uneducated, peasant woman, Lucia Santa, plonked into New York’s Hell’s Kitchen from Italy.

It is said that Lucia Santa is Puzo’s mother and what a woman she must have been. Her life as you can expect, is not easy with six children, one dead husband and another husband with mental illness. Lucia Santa, has the strength of several men, ruling her family with an iron fist through the Depression and War. Like so many women past and present around the world, she can’t afford to succumb to self-pity and has no choice than to work hard to protect and nurture her brood in order to survive.

Puzo captures summer in New York in the Tenements with the community of Italian women whose lives were governed by poverty yet pioneers in their own right. … ‘they moved in a sadder wilderness, where the language was strange, where their children became members of a different race.’

The language is almost poetic as we are introduced to Lucia’s seventeen-year-old son Lorenzo, riding his black horse through the streets of New York in 1928. One by one, Puzo allows us into the lives of the older children, giving tantalising glimpses of other families on the street and takes us on a journey of struggle, despair, and joy until the second World War.

The characters are well drawn and we learn of the petty small mindedness of the community in which Lucia Santa lives. ‘What cronies they were. How they ran to each other’s apartments, up and down the stairs, into the adjoining tenements… taste this special dish. After the initial pity and condolences, the true face of the world showed itself to Lucia Santa.’

The writing is inspirational and is truly a wonderful chronical of a matriarch and the immigrant’s life.

2 thoughts on “Book Review: The Fortunate Pilgrim by Mario Puzo”

One form of public transport in downtown Melbourne? #melbourne #collinsstreetmelbourne
I may not have a sporting bone in my body, but I can certainly appreciate history especially when it comes to women’s place in it. This little book packs a punch about the first female cricketers in Australia. Check out my latest review via my bio link. #bookstagram #booktoread #womenscrickethistory #womenssports #newrelease #australianhistory