S.C. Karakaltsas was born in Melbourne and spent the first three years of her life in Singapore. Her family bought a dairy farm in Maleny, located in South East Queensland where she spent most of her childhood. As a teenager she moved to Melbourne where she finished high school and studied Economics at Monash University. She spent more than thirty years working in the corporate sector until she discovered a love for writing in 2014.

This blog originally commenced to explain the journey in writing her first novel. Her father passed away some years ago and she discovered letters he’d written in 1948 to her grandmother. From the letters, a story of hardship, Colonialism, racism, violence and murder was untangled. Something unravelled inside her to drive her to write and published her first novel, Climbing the Coconut Tree  in February 2016. Check out her first blog post  for more.  https://sckarakaltsas.wordpress.com/2015/05/19/the-letters/

She began writing short stories in 2015 and The Surprise was shortlisted for the Lane Cove Literary Awards in October 2016 which is included in her second published book titled, Out of Nowhere – A Collection of Short Stories,  released May 2017. Another story, Stanley Place Boys received the award of Highly Commendable from the 2018 Monash Wordfest.

Her second historical fiction novel, A Perfect Stone,  a dual timeline novel set during the Greek Civil War in 1948 and present day Melbourne, was published October 2018.

S.C. Karakaltsas has always been an avid reader and now blogs about the amazing books she’s read. 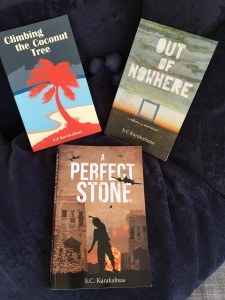 29 thoughts on “About S.C. Karakaltsas”

Surely this is an illegal gathering. #gnomes #gnomesville #urbanforestgnomes
And what have I been up to since the release of #aperfectstone? Just another historical fiction, that’s all. Hope you love the cover as much as I do. Thanks Anthony@guardadaba #thegoodchild #coverreveal #newreleasecomingsoon #historicalfiction #books #bookstagram #readingcommunity #australianbooks #australianhistoricalfiction