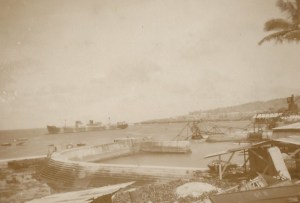 Like a good book put aside, I anticipated the next revelation.

I learnt about the friends my father had made; what he ate, the cheap cigarettes he’d bought to send home and the native phrases he’d learnt. He went to dinner parties; joined the rifle club; played cricket, went to the outdoor picture theatre and attended a fatele which he described as a native dance.

I discovered that the Gilbertese natives had been sent home and replaced by Ellice natives. I wondered if this was related to the strike? “Well anyhow the latest rumor is that, since they can’t get enough Ellis labour, they’re going to recruit about 600 Chinese which will means I’ll have to learn Chinese!!”

I reviewed his earlier letters and it was the Gilbertese natives who had gone on strike to get 10 pounds a month. If you went on strike in 1948 they merely sacked and deported you. Imagine doing that today?

But then, there are more subtle and covert ways to deal with workers these days.

1 thought on “What Happened to the Strikers?”

Having a rest after trekking around a couple of exhibitions at National Gallery of Victoria. Saw the work of two of the most significant and influential artists of the late twentieth century in Keith Haring | Jean-Michel Basquiat: Crossing Lines. It ends 13/4 and is wonderful. And then there’s also Roger Kemp too. #ngv #art #melbourne
Really liked this one! Check out my #moviereview! It’s opens in Australia 20/2/20. #movie #theprofessorandthemadman #newrelease