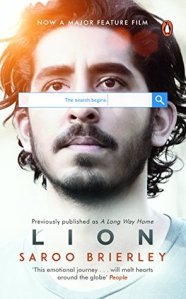 I saw the movie first and was blown away by this amazing story. I then read the book and it was no less powerful.

This is the story of five-year-old Saroo, who accidentally becomes trapped on a train which travels half way across India. When the train eventually stops, he finds himself in Calcutta lost and alone. He dodges disaster and with luck on his side ends up in an orphanage where he is adopted by a caring Australian family. Growing up in Tasmania, he wonders where he has come from and his nagging memories stir him into action to find out. It takes years of dogged patience and with encouragement from friends he uses technology to methodically trace his footsteps back to his family.

It’s an engrossing story despite the fact I’d seen the movie which by the way, does a remarkable job with the adaptation. The vulnerability you feel for this five-year-old keeps you on edge and it is incredibly brave of the author to reveal it all on the written page. It’s well written enough although with a matter of fact approach. Although we’re not privy to every one of Saroo’s emotions, we nevertheless feel his every agonising step of what was a difficult journey.