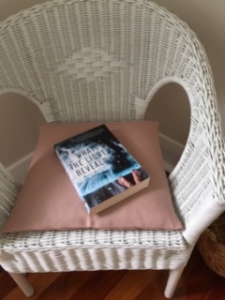 Military secrets, spying for the Russians, fear and discrimination for your beliefs – this is an intriguing tale about what a communist’s life was like in fifties Melbourne. Conrad and Ruby, members of the communist party with one adopted son and another on the way are treated as outcasts after Conrad is falsely accused of spying for the Russians. Watched by ASIO, unemployed and their reputation in tatters they are forced to flee Australia to live in Russia.

The story diverges into not just about life in Russia but what happens to a family with secrets who never feel they belong in their adopted country and where every movement is under scrutiny. But this book is so much more than that. The characters are well developed as we are privy to the points of view from Conrad, Ruby, Alex, (the elder and adopted son) and Peter, the biological son.

Fast forward to Russia in the early seventies and this is where the family almost implodes from secrets and lies and where their very survival is tested. Are the ideals held so closely while living in a Western country destroyed by the reality of living in a communist state?

“In a sudden breathless cleft between sleep and wakefulness, in darkness, eyes wide, mouth open, she listened for the rumbling of the tanks, the gravel-crunch of soldiers boots, the whispered metallic click of rifles being readied to fire. Nothing. She waited for her heart to settle. Breath by breath she let go. “

They belong to neither country and the only thing they do have is each other. When tragedy strikes, we feel for each of them as they’re torn apart by distrust, anger and grief. Alex, whose path was set by his parents is bewildered and his vulnerability is touching as he comes to grips with what his future holds.

This is a wonderfully written novel inspired by the authors own aunt and uncle. He borrows a lot from them to give us an insight into two worlds. It’s not often that a reader gets to meet the author, to hear him speak of what he did over a fourteen-year time span to research, interview, and write a story. It surely is a labour of love.

2 thoughts on “Book Review: What the Light Reveals by Mick McCoy”

One form of public transport in downtown Melbourne? #melbourne #collinsstreetmelbourne
I may not have a sporting bone in my body, but I can certainly appreciate history especially when it comes to women’s place in it. This little book packs a punch about the first female cricketers in Australia. Check out my latest review via my bio link. #bookstagram #booktoread #womenscrickethistory #womenssports #newrelease #australianhistory