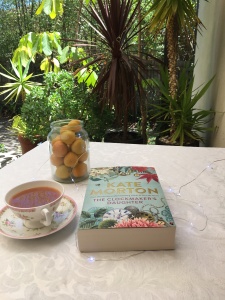 Like Kate Morton’s earlier novel, The Lakehouse, the star of this show is actually another old house. Everyone else are bit players in a complicated history spanning more than a century. As you can imagine, it’s not a short read, nor is it particularly easy to read for a half an hour a night as many readers might want to do. No, this requires you to concentrate and remember each timeline, each character, their backstory and how they fit into the tangled web which the author has cleverly created.

Edward Radcliffe is a wealthy artist who, with a group of other artists and models spend the summer of 1862 at Birchwood Manor. A woman is shot and another is missing and what happens there leaves scars and mystery about for generations to come. Fast forward one hundred and fifty years later and Elodie Winslow finds a sketch pad and a satchel which as an archivist peaks her yearning to know more, especially because for some reason she senses a connection.

There is a labyrinth of information and description which at times frustrated me as it slowed the story down a bit too much for me. There was so much detail, yet when it really counted towards the end there was very little.

This novel is almost like a collection of short stories weaving a thread throughout. Of course it all comes together as you would expect although the story with Elodie had too many coincidences for my liking. I wondered if telling the story from Lucy’s and Lily’s point of view might have been more impactful as well as shorter. I might be controversial but I’ll  throw it out there anyway – I didn’t really see the point to the character of Leonard and his story seemed more of a  filler to me.

Don’t get me wrong, this novel is a beautiful and evocatively written novel.

‘Edward’s portrait of Fanny, the one which she wears the green velvet dress and a heart-shaped emerald on her pale décolletage, was brought in by the Association when they started opening for tourists. It hangs on the wall of the first-floor bedroom, facing the window that overlooks the orchard and the laneway that runs towards the churchyard in the village.’

With a good edit, the story would have moved on a bit faster which is what I was after. But if you love a languorous read to take it all in slowly then you will probably really love it. For me it was enjoyable enough but not the brilliant I was expecting or hoping for.

1 thought on “Book Review: The Clockmaker’s Daughter by Kate Morton”

How beautiful is autumn? #autumnleaves
Visit to Drouin today with my mother, then lunch in a park which so happens to be named after my grandfather Alex Goudie. Very special. #drouin #picnicinthepark