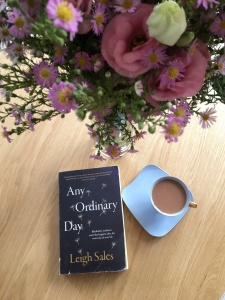 I closed the last page and had to go for a walk to clear my head and take in the colour of the day. The brilliance of blue sky contrasted with the red, yellow and green of the falling leaves helped me  contemplate what was in this book. The walk brought me into the ‘now’ of savouring my own ordinary day.

Leigh Sales explores what happens to a person when they’re blindsided by a moment they never see coming. She carefully treads through her own life as a mother, wife and award winning journalist, who you think would be resilient having had to confront other people’s tragedies on a regular basis. But journalists are only human too and she readily confesses to her own blindsided moments.

People like Walter Mikac who suffered tremendously when his wife and two young daughters were gunned down; Stuart Diver, who buried under tons of earth and rubble was unable to save his wife; Juliet Darling whose husband was brutally murdered by his son; the list goes on. Sales talks to each one about their trauma and grief and what they valued most from those around them in their road to recovery.  She talks to detectives, medical personnel, families and friends to learn from them. The discussions are honest and at times raw causing Sales to examine the role of journalists and the media and in particular her own actions in the past of pursuing a story despite the cost for the person who has suffered from a trauma.

I was very interested in the role of support and what it is that gets people through. While  Sale weaves in some scientific theory with facts and figures it’s not heavy handed. It’s matter of fact and down to earth and easy to read. At times, it’s confronting but thought provoking enough for you to learn something, if not be inspired.

3 thoughts on “Book Review: Any Ordinary Day by Leigh Sales”

Nothing is as it seems in this thriller debut by Australian author James McKenzie Watson. This story burrows into your mind as you try to make sense of the unfolding event, all the while compelling you to turn each heart-thumping page. It’s beautifully written, evocative of language and place. Check the rest of my review via my bio link. #bookstagram #bookreview #books #australianauthor #read #readingcommunityaustralia #readabook
Interestingly this book was published in 2019 before the world spun into total unpredictability. But it’s taken that long for me to pick this one up despite being a fan of Penny Wong.