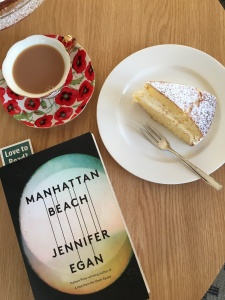 Anna Kerrigan is twelve when she meets Dexter Styles, a man with a shady history in the underworld but with a respectable façade. A couple of years later, Anna’s father disappears. Anna, along with her mother and disabled sister, is devastated.

At nineteen Anna meets Dexter Styles again and is convinced he knows what happened to her father and proceeds to find out. This book is so much more than the intrigue of Anna’s father. Set in New York during the Second World war, Anna pushes boundaries as a woman to become a deep sea diver repairing warships.

The book is thoroughly researched and very detailed. For some, the intricate detail around what was happening in the Brooklyn Naval Yard might hold a lot more fascination than it did for me.

But I did enjoy Anna’s story. The description of her being encased in a two-hundred-pound dress and metal helmet was incredible and had me taking deep gulps of air.

“Then she was inside, encased in a humid metallic smell that was almost a taste. They screwed the base of the helmet into the breastplate like a lightbulb fitting a socket. A crushing weight bore down upon Anna through the collar’s sharp edges. She writhed under it, trying to move away or unseat it. There were two raps on top of the helmet, and the round front window popped open, admitting a shock of cool air.”

The battle Anna had with authorities to allow her to participate in a male-oriented world was compelling as was the love and care she had for her sister Lydia. We were given glimpses of her relationships with other women too but for the most part, it was her relationships with her father and Dexter which dominated the plot.

However, it almost seemed as if the research needed to find a home no matter what and I think when the narrative changed to the points of view of these two men I found this part jarring. The two male characters weren’t likable enough to hold me and I would have preferred the story to have stuck to Anna.

All in all, the book was good enough to hold my attention but not enough to rave about in glowing terms for me.

#darkemu is a sobering read yet provides a hopeful argument for each of us to change our thinking. #bookreviews #books #mustread #aboriginalhistory #read #bookworm
Happy birthday to my beautiful mother in front of a cake made by her granddaughter Eva.