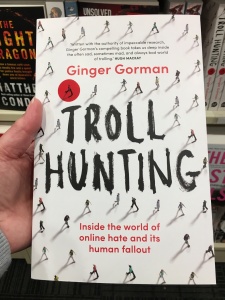 I feel as if I’ve lived under a rock. The revelations this book unfolded for me were not only eye-opening but positively scary. According to the book’s blurb, journalist Ginger Gorman was trolled in 2013. After doing a story she received hateful tweets, including a death threat, and a picture of her, her husband, and daughter appeared on a fascist website. Although terrifying, she began questioning who the trolls were and why they did what they did. So began her incredibly insightful investigation into another world, a world of cyberhate, cyber-crime and a community of faceless trolls.

Gorman talks to a realm of professionals including psychologists, academics, law enforcement agencies, victims as well as the trolls themselves. The motivation behind the troll’s activities is wide-reaching from causing mischief for fun to disturbance, disruption to individual lives or in the wider arena of political spheres. Sometimes their activities have catastrophic consequences. Gorman dips deep to get into the psyche of a troll’s mindset and one troll admitted that when he was eleven he was on the internet playing pranks for hours; “in other words: the internet was my parent.” The troll in question agrees with Gorman’s observation that for some young people, radicalisation into trolling begins at a young age.

The trolls’ backgrounds are varied. There are the women haters, terrorists, ultra-right wingers, and left-wingers, to categorise a few. But mostly they’re men often holding down ordinary jobs, and educated too. It’s naive to think that people like this haven’t been around for years and years. But the difference here is anonymity in a different dimension.

It makes you think about your own online behaviour. Like yelling in the car at the mistake someone’s made on the road, our road rage is often hidden safely behind the confines of the vehicle. Online, does anyone really know who we are? And words can hurt far more than anyone realises.

It’s a hard read with each turn of the page revealing something more disturbing than before. Yet so compelling is it, you find yourself fascinated. I almost reached for my social media apps to delete them all. And that is a real reaction as we wonder how safe we are in the online world.

This book would have been incredibly difficult to write. The depths of Gorman’s own anguish shows through and as a reader, I was right there with her. Trolling can destroy lives and although some have gone to jail, the law enforcement agencies don’t appear to have fully caught up with this epidemic activity, and that’s scary.

I’m in awe of this author’s bravery to have not only conducted incredible research but possibly put herself and her family into danger, physically and mentally. Yes, it’s an eye-opener and if you’re on social media it would be wise to check this book out.