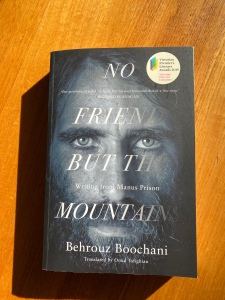 This is a book every Australian should read. But I warn you that it’s a hard one to get through. It’s confronting and uncomfortable, mostly because each of us will feel complicit in allowing our various governments to treat our refugees so badly.

It’s not meant to be a literary masterpiece, instead the writing is a remarkable stream of consciousness smuggled out by text from Manus Island where Boochani was held prisoner for five years. That in itself is an incredible accomplishment deserving of our time to read and absorb every word.

We, Australians have known it as the Manus Island Regional Processing Centre or the Manus Island Detention Centre and after reading Boochani’s account of what life was like, it’s actually worse than any modern day prison – it’s more like a concentration camp.

Boochani relays everything about his experience, and his observations are insightful and confronting. It’s a commentary of humanity under duress and he paints a painstaking and brutal picture in both narrative and poetry. He and other refugees endured cruelty, hardship and tortuous conditions designed to bring them down. What makes someone want to flee their home and take a hazardous boat trip to a place they hope will give them a better life? It’s only someone truly desperate. Yet these refugees were used as pawns in a political plot from which there was no escape.

“We are hostages – we are being made examples to strike fear into others, to scare people so they won’t come to Australia. What do other people’s plans to come to Australia have to do with me? Why do I have to be punished for what others might do?”

This book is more than a description of what life was like for Boochani. It’s an academic analysis of the Australia’s border system described as systematic torture which he labels as the Kyriarchal System.

“The term Kyriarchy was first used by radical feminist theologian Elizabeth Fiorenza in 1992 to describe intersecting social systems of domination and oppression… the term also captures the way the intersecting systems are perpetually reinforced and replicated. This important aspect connects the prison with Australian colonial history and fundamental factors plaguing Australian society, culture and politics. “

You may agree or disagree with Boochani’s analysis but it’s thought provoking. There are numerous examples cited which breached basic human rights, particularly freedom. Use of the telephone was limited, food sparse, communication with the outside world non-existent, disgusting sanitary conditions, and nothing to do.

“A few people were able to get hold of a permanent marker and draw a backgammon board onto a white plastic table. They began to play, using the lids from water bottles as counters. Almost instantly, a group of officers and plain-clothed guards entered … crossed out the game. They wrote over it in bold letters, “Games Prohibited’.”

It was a very difficult book to read during the time of our own lock-down. Then I read a tweet dated 27 March 2020, saying the following: “the refugees being detained at the Mantra Hotel are not being given any soap. ABF (Australian Border Force) said they can apply for it in writing and would take 14 days to approve. “

Don’t we all put our trust in our governments that they will ensure people will be treated with fairness, respect and dignity? This book tells us not to count on it.

2 thoughts on “Book Review: No Friend but the Mountain: Writing from Manus Prison by Behrouz Boochani”