This novel set in the early seventies is an epic character study of the Hildebrandt family and their individual confrontation with the moral dilemma of how to be a good person.

Franzen is highly skilled in dropping the reader into the point of view of each of the family member. We begin with the father Russ, an assistant minister, a weasel of a man, weak and highly unlikeable as he navigates his way out of a long marriage for the lust of a young widow, Frances who cares little for him. Russ takes no responsibility for his moral dilemmas believing it is everyone else’s fault, in particular his wife, Marion.

About Marion, Russ says, “if she hadn’t been so supportive of his failings, he might have made peace long ago. Frances had restored him to his courage, his edge, by believing he was capable of more.”

Learning what’s behind Marion’s self-loathing and remoteness, she deserves our pity which serves to enhance the reader’s disgust towards Russ. Her support has elevated him in the community and within the family despite hiding a traumatic secret of who she truly is. And we wonder at her power to be someone she’s not for so long.

The oldest son, Clem sees his father for what he is. Away at college he is naively drawn into his first relationship with a woman who is not his younger sister, Bec. He seems too innocent to be true but confronts a dilemma about studying instead of fighting in the Vietnam war.

His younger sister, Bec, a typical teenager, cool and beautiful, looks for guidance not from her self-absorbed parents but from hip youth leader Ambrose, Russ’s arch enemy. The younger son, Perry is the one who most needs help who finds solace only through drugs.

This is a curious family with an underlying belief in God as an excuse for their behaviour yet the older children have been allowed to neglect their religion practice. Russ, out of all the characters, is the one deeply flawed character I disliked the most which of course makes him the most interesting.

Marian despite our sympathies about her earlier life, cruelly dumps what she believes is a hereditary mental health problem onto fifteen-year-old Perry who is the most ill-equipped to be able to handle it. He is the character, I felt most sorry for. Severely let down by his parents, the only shining light is his sister who tries inadequately to help until she was drawn into her own problems. The only mature one, out of them all was eight-year-old Judson who is a delight.

Finding God is a vehicle of action and a solution for each of the characters woes, which is probably something that might be true for many people.

‘Dear God, she prayed, if this is the final test, I accept the test. If my time has come, I’ll die rejoicing in you… If it’s your will that I live, I promise I will always serve you.’

This indeed is a dysfunctional family and Franzen portrays them and the small town they live in, beautifully. Strong themes of religion run through it, quite heavily at times, as well as current issues of the Vietnam war, drugs and mental health.

This is a very lengthy novel, beautifully written but overly long with dumps of religious messaging which was too laboured for me. Yet, the characters are what kept me completely compelled. Give it a go. 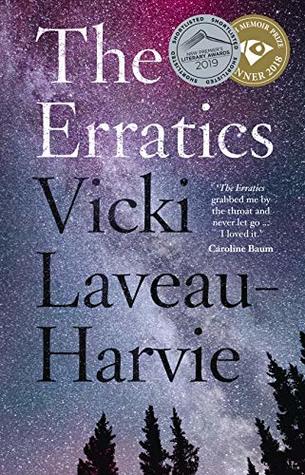 I was keen to read this Stella Prize-Winning memoir by debut author Vicki Laveau-Harvie. The opening sentences hooked me and I knew I’d be in for a roller-coaster ride with this one.

My mother is not in the bed. My sister takes her pen, which is always to hand… and, with the air of entitlement of a medical professional, writes MMA in large letters at the bottom of the chart.
MMA.
Mad as a meat-axe.

So what’s it about? The author and her sister are called to their mother’s bedside after she’s had a hip operation. The daughters have been estranged from their parents for years and their mother has an undiagnosed mental illness, The mother exudes charm and deception and her facade unravels the longer she is kept in care. The author with her sister visits their father and is shocked by the decline of his health and fears for his life if their mother is allowed to go home. The sisters engage in tactics to save their father and keep their mother in permanent care.

It might seem harsh on the surface but as we are led deep into the dynamics of the family, their upbringing and the delusional and unpredictable behaviour by the mother our sympathy grows. Grappling with the care of elderly parents is a hot topic as the number of elderly in care increases and the burden of deciding what’s best is placed on offspring who have little or no clue other than to be guided by the health professionals who have cost and resources for care as a driving force. We also trust that our parents are capable of looking after one another but in this case, the author’s father is being systematically starved and abused by their mother.

That’s not to say it’s all doom and gloom. It’s quite humorous in parts with the sisters freeing their father from his isolation and their mother’s control. The author paints a dark atmosphere of a cold, windswept landscape that is Canada in the winter and her feelings of a home and place she once knew as a child is far removed from her life as an adult in Australia. She poses the questions we all face when dealing with an aged parent, the turmoil of decisions and the fretting for a past gone. She is also wearing the guilt of leaving her sister who lives in Canada to handle the bulk of the care.

We don’t, however, get a full understanding of what happened in their childhood and the cause of their estrangement and I would have liked to know more about the fractious relationship. But we can imagine from the little glimpses of the mother’s behaviour what it might have been like and the next paragraph sent a chill through me.

One of the few coherent messages my mother repeated to me and to my sister as we grew up, a message she sometimes delivered with deceptive gentleness and a touch of sadness that we weren’t more worthy prey, was this one, and I quote: I’ll get you and you won’t even know I’m doing it.

It’s heart-warming, wrenching and beautifully written with a lot packed into one hundred and seventy-seven pages. Give this one a go.

There’s a lot packed into this book as the author explores the perfect suburban lifestyle of middle class America to examine race, teenage angst, and economic division.

The premise of the book hooked me. Elena Richardson, mother of four teenage children, journalist and wife of a lawyer husband lives in a middle class progressive suburb called Shaker Heights. Mia Warren, artist and single mother to teenager, Pearl, lives an itinerant lifestyle in the pursuit of her art until they decide to lay down roots in Shaker Heights in the Richardson’s investment apartment. When Elena Richardson’s best friend, Mrs McCullough tries to adopt a Chinese baby, a custody battle ensues with the birth mother which divides the entire community, placing Elena and Mia on opposing sides with unexpected consequences.

Shaker Heights plays an important role in this novel. “… had been founded, if not on Shaker principles, with the same idea of creating utopia. Order – and regulation, the father of order – had been the Shaker’s key to harmony.” I imagined a Stepford Wives, Desperate Housewives meets The Truman Show type of place – all perfectly in order.

The beginning is a jolt when we find out that Elena’s youngest daughter Izzy has set fire to the Richardson’s perfect suburban home. It’s not until the end that we get a sense as to why. In between, the life of the Richardson’s perfect family unfolds slowly until the second half when it ramps up with misunderstandings, resulting in twists and turns we don’t see coming.

The characters of Elena and her teenage children, Lexie, Trip and Moody are detailed although the teenagers seem to be typical of a movie cast. Mention of the difficult Izzy is sprinkled through the novel although at times, I had forgotten there was indeed another child – the one who had burnt down their house. What we do learn about Izzy is her mother’s fractious relationship with the girl which causes the teenager’s angst and rebellion. Yet Elena’s relationship with Izzy has more depth than with her other children for whom she barely gives any time.

Living a life with few possessions and little security, Mia and Pearl on the other hand have a beautiful relationship which is what draws Izzy, Moody and Lexie to Mia who gives them what Elena cannot. But Mia is far from perfect with secrets of her own.

Elena is comforted by the regimen of rules and regulations of Shaker Heights but her family’s intense involvement with Mia disturbs her so much that she breaks some of her own rules with disastrous consequences.

There is a lot to like about this book as it draws you into the bonds and rights of motherhood, friendships, unrequited love as well as middle class entitled attitudes. The males in the story are necessary props having little influence in what is going on.

I liked the author’s treatment of  Mrs Mc McCullough and her yearning anguish for a baby. The way race and class was dealt with, was clever as was the unfolding debate about the adoption of a Chinese baby. The white middle class view comes out brilliantly. “In the future we’ll all be able to look past race. You can just see what a wonderful mother she is,” one of the McCullough’s neighbours said… “You can tell that when she looks down at that baby in her arms, she doesn’t see a Chinese baby. All she sees is a baby, plain and simple.”

And the debate that a white wealthy couple are entitled to have a Chinese baby, instead of her poverty stricken Chinese mother, divides opinion everywhere picking off the scab to expose the ugliness of what racism can be, just because people can’t put themselves in the shoes of anyone else who is different. And this is the part of the book which I enjoyed the most.

However, there were some holes which bothered me and seemed almost too contrived as if to make everything fit nice and neatly to get to an end where you are left with questions. To reveal them would delve into spoiler territory but the motivations behind Elena, and in particular, Izzy was not quite satisfying and in some cases required a leap of faith to accept.

Little Fires Everywhere (which is a great title) is a very well written and easy to read book, digging deep and provoking thought about the middle-class suburban lifestyle. While I did enjoy this book, I didn’t love it. Would I recommend it? Yes, go ahead and check it out.