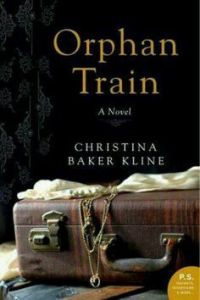 For more than eighty years and until 1929, in excess of two hundred thousand homeless children were put onto trains and sent out to the mid-west of America. The trains stopped at towns where adults were encouraged to ‘adopt’ and give a home and education to an orphan child. More often than not the children were used and abused and many were seen as little more than indentured servants. This is a little known part of American history and reminds us again how children are not always treated the way they should be. Sadly, history like this seems to continually repeat itself.

Orphan Train is about a ninety-one-year-old woman, Viv who befriends a seventeen-year-old girl, Molly, who herself has lived a life in foster care. She has been shunted around many foster families many of whom are well intentioned but can’t provide the stability and sense of love and belonging that Molly needs.

Viv tells Molly her story and the reader is taken back in time to the 1920’s when Viv was an orphan child. She had migrated with her parents and three siblings from Ireland to New York where the hardship described reminded me of Frank McCourt’s account of life as a migrant in Angela’s Ashes. A fire sweeps through the building and Viv (or Niamh as she was known by her birth family) is the only survivor. She is taken in by the Children’s Aid Society and placed on the train for eventual adoption.

The stories of both Viv and Molly are heartbreaking and moving. Molly, a Native Indian never feels she belongs and Viv is the same and this is where they truly understand one another.  Viv, as a child trying to cope with her changed circumstances was particularly sad.

I wasn’t convinced about Viv’s life as an adult and this part fell a little short for me in some of its predictability. Molly’s back story around her heritage never really had the chance to be fully explored.

Pic is courtesy of Goodreads

The Good Child is a compelling story of two very different women: 72-year-old Lucille, with a hidden tragic past, and 30-year-old Quin, whose ambitions lost her everything. On sale via kindle two days only #thegoodchild #historicalfiction #bookstoread #newreleasebooks #bookstagram #booksbooksbooks
Smokehouse by Melissa Manning is a stunning debut by an extraordinary author. A book of short stories interlinked and set in the evocative landscape of Tasmania. Check out my review via my bio link #shortstorycollection #bookreview #bookstoread #bookstagram #bookrecommendations #bookstagramaustralia #reading #australianauthors #tasmania #debutbook @lissmanning