I began telling friends about my project. I was surprised they were interested – they wanted to know more.

“Where is Ocean Island?”
“In the middle of the Pacific,” I happily answered. But that meant nothing to anyone.
“You know, Nauru?” I said.
“Yes.”
Everyone knows about Nauru but only because of the emotional and raging debate against Australia using it to house asylum seekers.

“Well, it’s near there. About a hundred or so kilometres to the east,” I said confidentally.But I knew very little else.

I thought I’d better find out a bit more and the internet enlightened and surprised me.

I read one reference from a fellow to the question, ‘where is Ocean Island’ and he replied, “All over Australia mate.” What did he mean? I soon found out.

In the early 1900’s, Nauru had been in the hands of the Germans who mined phosphate. Albert Ellis, a young New Zealander discovered that there was tons of phosphate on nearby Ocean Island and placed a stake on behalf of the British. He negotiated with the island chiefs and paid them fifty pound a year and promised to bring in water. The islanders or Banabans ( as they were known)  thought it was a great deal considering that most of their number had been wiped out from the last long drought some years before. So at the turn of the century, mining commenced and didn’t stop until the phosphate was virtually gone in 1979. During that time, Australia managed Nauru and Ocean Island jointly with New Zealand and Britain. When the First World War broke out, the British secured Nauru from the Germans and the Australians mined it too.

However,during the Second World War the Australians abandoned both islands when the Japanese advanced and occupied most of the Central  pacific region. The islanders were treated harshly and most of the Banabans were dispersed across the other nearby islands. Food was scarce and death was the norm at the hands of the Japanese. My father must have been touched by the site of old Japanese tanks left abandoned around the island. This is a photo he took in 1948. 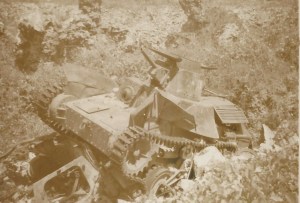 Today, Banaba as it is now known, belongs to Kirabati, one of the poorest nations on earth. You can just make out the speck called Banaba near Nauru on the map above. Now largely abandoned with an ecological disaster on their hands, a small number of native Banabans try to eek out a living.  The rest of their people live on Rabi, an island bought for their relocation in 1945 – some hundreds of kilometres away in Fiji.

So what is phosphate used for? It was mined and brought back by ship and used primarily by our farmers as fertiliser.

My curiosity and excitement about this island was growing. I was drawn to the place and its history and the experience my father had in the twelve months he was there. In the back of my mind, the threads of a story was brewing.

I wasn’t a writer I told myself. I didn’t know what I was going to do or how this project was going to unfold, but I knew I had to push on.