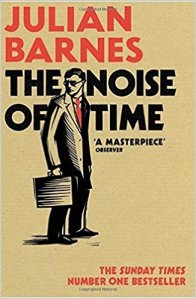 The Noise of Time by Julian Barnes is about the life of Russian composer, Dmitri Shostakovich. You may well have heard of Shostakovich and his music. Successful in Russia, he enjoyed acclaim, until at the age of 30, he wrote an opera attended by Stalin who hated it. This was a time when millions of people were murdered by Stalin and Shostakovich fully expected to be one of them after his work, previously acclaimed was denounced in 1936.
‘Lenin found music depressing.
Stalin thought he understood and appreciated music.
Khrushchev despised music.
Which is the worst for a composer?’ thought Dmitri Shostakovich.

Surviving, he spends his life as a pawn by the State to suit their own political agenda.

In three parts which marked three different events, the author illuminates us with details of Shostakovich’s early life, his marriages, his music, his friends and enemies; and life in the Soviet Union through several decades until his death in 1975. The reader gets a sense of  Shostakovich’s insecurities, his obsessions and the constant compromise for his art in order to survive and regain a foothold into the elite when he regains popularity following Stalin’s death.

I’d never heard of the composer and have never read anything by Julian Barnes who won the Pulitzer Prize for an earlier novel called The Sense of Ending.

The novel opens with Shostakovich standing by a lift, suitcase in hand waiting to learn his fate after he is denounced. I was fascinated by the life of Shostakovich and also the Soviet Union particularly under Stalin. Unfortunately for me, that’s where the fascination stopped.

There was a lot of detail about three significant events in the composer’s life. However, it  became wooden  as this fictional biography disintegrated into an essay about the constraints of creativity in a totalitarian society and less about the feelings of the man and those around him. The author doesn’t make it easy as there’s a plethora of  unfamiliar names and places which  became confusing.  Although well written, the story meandered in the second half into a general narrative. The end reads like a biography of facts told with little emotion and could have almost qualified for a Wikipedia entry. “Two years after he joined the Party, he married again: Irina Antonovna. Her father had been victim of the Cult of Personality; she herself was brought up in an orphanage for children of enemies of the state; now worked in music publishing.”

Reading this short book did compel me to read more and listen to the composer’s music, which wasn’t to my taste.  Shostakovich led a difficult life and I’m grateful for the extra knowledge and glad I persisted.  But my advice would be to read up on the composer before you tackle this one – it might make more sense.

1 thought on “Book Review: The Noise of Time by Julian Barnes”