Instead of a book review, this week, I thought I’d chat with internationally published author, Peter Lingard who has just released his debut novel, Boswell’s Fairies – see my earlier review

I hope you enjoy it.

Peter Lingard, tell us a bit about yourself.

My life has been in phases. I went to a good school but quit at 15. I worked in a bank and found it stultifying. I served in the Royal Marines and, after leaving them, worked for a shoe importer because marine shipping was the closest thing to Royal Marines on the filing system used by the employment agency. The man that owned the company considered taking me on a good deed. It was an easy jump to freight forwarding and later my employer sent me to the US to open a new office for them at JFK airport. It took me a number of years but I eventually owned my own freight forwarding company in NY.

I yearned to travel again and returned to the UK where I worked as an accountant and a farmhand for a while. However, too many people were saddled with attitudes that soured me. (I wrote to a newspaper in Wales suggesting that if they put as much energy in their work as they do in hating the English, they be a very successful country. The responses were less than pleasant.) As Australians speak English, I thought this country might be a good place to visit, and I arrived in 2000.

You’ve just published your first novel. What is your book, Boswell’s Fairies about?

A lot of servicemen are adept at telling fantastic stories. Marines I knew swore they’d swum the widest oceans, climbed the highest mountains (not without justification – think of the Falklands war), and dated the most beautiful and willing women. I have blended these colourful lies with the story of a squad of recruits undergoing the 10 months of basic trading. The main characters are a bored banker, not too hard to image, and a pro wrestler who was fed up of having to lose every fight until someone decided he’d paid his dues.

What inspired you to write this story?
What’s the point of having a good story if you can’t tell it to people? Writing it was enjoyable. That is until one has to edit and edit and re-edit.

How long have you been a writer and what influenced you to first put pen to paper?
I was always a good joke teller and I excelled when it came to shaggy-dog stories. I could take a shaggy-dog story and make it shaggier but then sometimes forget about the punch line. While there was never a decision to start writing, I used to write things down and improve my jottings, as I did with jokes. Once I was happy with the result, I’d forget about them. In 2002, or then about, my wife suggested I join a writing group to see what others might think of my musings. The Americans have an expression that fits … run it up the flag pole and see if anyone salutes it. Well, quite a few did salute my stuff. A radio station in Queensland liked my tales but not my writing skills and the host, Charles Eeles, took the time to give me some pointers. Then I progressed from one writing group to another until I found the current bunch of writers at Phoenix Park. We are a good mix and are well advised by the facilitator, Nicole Hayes.

You’ve written more than 300 short stories, many of which have been published. How difficult was it to write a full length novel?
It wasn’t much different in some respects. Each chapter in my novel was a short story and the continuity of the plot and main characters strung the stories together. Once I’d finished the book, I did away with chapters and only had breaks for changes of location. I’m working on another book which is another a collection of stories without much connection … well, the main character is a barman in a London pub and there will be an ongoing romance, but it’s still just a bunch of stories. Shaggy dog stories.

What books have influenced you the most and what are you currently reading.
I was impressed by My Son, My Son. I can’t remember the author’s name (if anyone says that about me, they die!). Another one was, I Bought a Mountain (again no author). I found Great Expectations enjoyable, even if though I had to read it as a school project. I like books by Scott Turow and Sebastian Faulkes. Dan Jenkins is an author who influenced my style. John le Carre’s The Pidgeon Tunnel (and everything else he’s written) please me greatly. Kamila Shamsie, A God In Every Stone impressed me. What am I reading now? Scott Turow’s Personal Injuries, but I’m not into yet (at 200+ pages).

I was raised to respect books. Never bend them back (it ruins the spine), never turn down the corner of the page to mark where you’re up to, and never leave a book unfinished. I still respect the first two, but I’ve decided the third is bull, so this book better buck up soon.

If you could give advice to an aspiring writer, what would it be?
Use advice carefully. Make sure you keep your style – unless of course it’s your style that’s holding you back. Be judicial … remember the adage; people do, teachers teach.

What’s next in writing for you?
As I mentioned before, I’m writing about the life of a London barman. The working title is The Book of Dave. It’s humorous and perhaps barbed at times but readers will laugh and, if I find the right lines, they’ll be sometimes saddened. Then I have two more books featuring the main characters in Boswell’s Fairies. One covers their time in the Philippines, Singapore, Malaysia and Borneo, and the other is about their return to England to find guys have grown hair to their shoulders and girls have hiked up their dresses. I don’t have titles for those yet; perhaps Asian Tour and Swing Time? We shall see.

Boswell’s Fairies     Now available on Amazon or on http://peterlingard.com/ 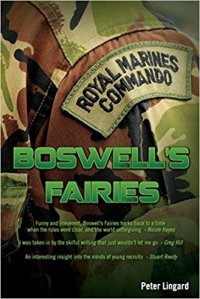 Peter Lingard’s  short stories have been published over 300 times in The Literary Hachette, Blue Crow, Structo, Crack the Spine, Short and Twisted, 100 Stories for Queensland, and other such magazines. Many pieces have aired on 4RPH, Brisbane, and Radio NAG, Queensland.  Fifty-two of his stories are published by Alfie Dog in the UK. He also appeared on Southern FM’s program ‘Write Now’  and on 3CR ‘Spoken Word’ to read, recite and discuss his work and was a regular guest  on 3WBC to read his tales. Peter’s  work has garnered praise, prizes, and accolades from critics around the world including Australia, America, and the UK.