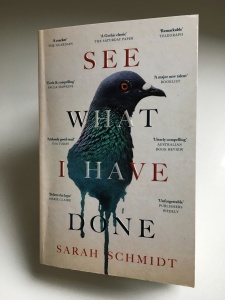 It’s 4th August 1892 and Lizzie Borden discovers her father dead in the home they share in Fall River, Massachusetts. Her step mother is later discovered upstairs. Both have been brutally slain by an axe. Strangely, Lizzie and the maid, the only two at home heard nothing. This is a respectable, wealthy family and the police and neighbours speculate about who could have done it.

The story mostly covers three days; the day before the murders, the day of and the day after. Schmidt retells this true story from multiple points of view; Lizzie, her sister Emma, the maid, Bridget and a stranger, Benjamin who had been sent to have words with Mr Borden the very morning of the murders.

We quickly learn that not all is right within this family. The sisters striving for independence still remain at home and unwed. They have a tight bond with each other which borders on the obsessive. Money seems to be at the root of the unhappiness. The father is very wealthy yet the family scrimps on basics. Lizzie, although almost thirty seems to be a lost soul striving for her father’s attention and her sister’s love, almost obsessively. Yet, she suffers from a type of amnesia and can barely recollect the events of the morning of the murders. The police appear incompetent and we never really get to the bottom of it. Bridget, the maid has her own problems and is desperate to leave.

The imagery is vivid; rotting pears, decapitated pigeons, rotting mutton soup and foul smells in an upstairs bedroom will leaving you feeling nauseas. Perhaps these repetitive images are a tad overdone, but it all adds to placing us right into this fascinating and intriguing story.

The author does a great job of interpreting the facts. The weak link for me is the penultimate chapter which was from Benjamin’s’ point of view and it jarred. Benjamin comes back to see the sister’s years later and we find out about Lizzie’s arrest and acquittal although little else. Then, the very last chapter takes us to Lizzie’s point of view and back in time again. I think the book might have been better without Benjamin’s chapter.

It’s very well written and the cover is superb. The timeline of facts at the end was also very helpful. We are kept guessing right up to the end. Did Lizzie do it or not? You need to make up your own mind.

2 thoughts on “Book Review: See What I Have Done by Sarah Schmidt”