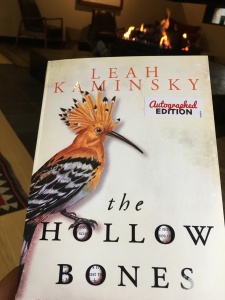 An enlightening fictional story of real life German scientist, SS officer, Ernst Scafer was an eye opener. Ernst is obsessed with nature and in particular a hunter of animals and a taxidermist. He is tasked by Himmler and Goring to lead an expedition into Tibet to confirm the origins of the Aryan race. I’d never heard of the so-called World Ice Theory which is as bizarre today as it was then except for the fact that the Nazi hierarchy were consumed by it.

Kaminsky paints a picture of what life in Germany is like from 1937 to 1939. We learn about Ernst as a boy as well as his love for Herta who as a woman must go to Bride School and learn how to be a good SS wife, must be of pure origins and who challenges her husband and his involvement with the Nazi regime. Ernst, however is a man of ambition who uses the regime as a benefactor for his scientific pursuits whatever the costs.

There is a lot in this book and Kaminsky has done a remarkable job researching and piecing a story together. I found the first half of the book about the growth of Herta and Ernst relationship the most interesting and wondered if perhaps this should have been explored more. I found myself wanting more about them and Herta’s missing sister. The second half of the book is mostly about the expedition to Tibet and at times seemed almost a non-fictional account from the research. The current day chapters from the point of view of a slaughtered and stuffed animal slowed the story down for me and jarred. And if you are at all squeamish about animal slaughter it might not be for you.

It’s a very descriptive and well written book which is nevertheless gives a fascinating glimpse about this little known period but it’s not really an easy book to read. The afterword was particularly interesting as it detailed what happened to Ernst and his fellow colleagues and their culpability during the war and afterwards. It’s quite a sickening eye-opener.