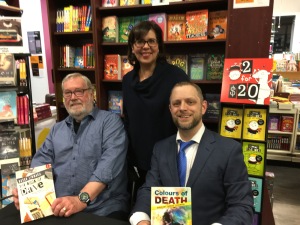 Last night I had the honour of saying a few words and launching two books of short stories for two wonderful writers, Peter Lingard and Robert New at Readings Book Store in Hawthorn.

I met Peter Lingard five years ago when I joined the Phoenix Park Writers Group and admire his writing. Peter has written more than three hundred short stories published in various publications around the world. He’s also written a full-length novel Boswell’s Fairies. (see my earlier review https://sckarakaltsas.com/2017/10/27/book-review-boswells-fairies-by-peter-lingard/) Last night, The Book of Dave was released to the world.

A bit about The Book of Dave by Peter Lingard
Dave Wilson is a London barman who, in late December, sifts through telephone numbers accumulated during the year. Each chapter tells the story behind the number.
He joins a band of people who wear pink underwear every Friday, goes to sea in a collier, helps a client sell his invention, takes a sick woman to hospital. Dave becomes friendly with a less than honest policeman, and flies to New York where he falls for an unobtainable woman.

If you ever wanted to get a bird’s eye view at what happens to a barman, this is the book for you. The fact that Peter once worked behind the bar gives some authenticity and he tells each story with humour.

I  also met Robert New five years when I joined Monash Writers Group. He was preparing his second novel, Incite Insight for release and I was writing Climbing the Coconut Tree. We both launched our books three years ago and have supported each other ever since.

Working full time and raising a young family, I asked Robert how he’s been able to write so prolifically and he told me that he simply tries to write at least two hundred and fifty words per day. That’s fewer words than this blog post but over a year adds up. Of course, there are days when he has the time to do more. That’s how he was able to put together Colours of Death. His passion for science shows through in each story as he finds unusual and sometimes bizarre ways people can be murdered.

A bit about Colours of Death: Sergeant Thomas’ Casebook by Robert New
What colour death would you fear the most? This is a collection of nine detective stories where colour plays a role in the mystery.
A high school awards ceremony turns to tragedy when the audience turns blue as they die.
A serial killer’s hair colour could be the key to their capture. An arsonist is trapping people in burning buildings, just to write a story about the rescuers. After a body is dumped in public, working out how the victim died is harder than decoding the intended message.
An incident with the Red Man haunts Detective Thomas, but may also be the key to solving a new case.

There is quite a bit of science behind the stories and you’ll definitely learn something.

It was a privilege to help launch these two books by two wonderful writers and I wish them every success.

Copies are available for sale now. Check them out. Links below:

The Book of Dave by Peter Lingard

Goodreads is a community of book lovers. Readers and writers come together to share thoughts and feelings about books. As a reader, I’ve loved reading what others think of books. I’ve also taken the time to share my relections.

As an author, it can be a place of trepidation as readers tell you what they think of your book. Not every book can be liked by everyone. I generally write for myself and when others appreciate what I’ve written, it’s an added bonus.

I am therefore very humbled by everyone who left a review for my short story collection, Out Of Nowhere.

Thanks to everyone who took the time to talk about it. 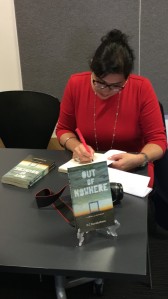 I mean the month of June, of course. Apart from the plunge in temperature in Melbourne, a lot’s happened. My book of short stories, Out of Nowhere was published. My webpage had a makeover. I held my first radio interview. My book was officially launched and I’ve made a further dent into my current novel. Whew!

Publishing a book means getting it out there to let readers know. I shot off a bunch of emails to libraries, distributors, and book stores. The two book stores who have my first book happily agreed to stock my second. Goodreads held a giveaway for five copies and 853 people from around the world entered; 300 put it on their book shelf to read. I did a couple of ads on Facebook with mixed results but overall got some good exposure. How that translates into sales is too early to say.

The radio interview was done a few weeks ago on 3SER 97.7 Casey community radio on a show called Viewpoints. I chose to pre-record it and was surprised how easy it was to talk about my work. Of course the host, Henry Grossek was the consummate professional and made it very easy by asking all the right questions.

Soon after I held my book launch on June 24th at the Wheelers Hill library with a good crowd in attendance. Book sales helped to defray the costs of publication. Award winning YA author, Nicole Hayes launched my collection with a wonderful speech. The support and encouragement I received from everyone was nothing short of phenomenal and the reviews so far have been very complimentary.

Amongst this feverish activity, I finally worked out the ending of my next novel, A Perfect Stone. Now on to finish my second draft then constant rework for the next few months.
Yes, it’s been busy.

Presenting my book trailer for Out of Nowhere: A collection of short stories.

A huge thank you to the very talented Jonny Lynch who put the trailer together; to Anthony Guardabascio  from Continue.com.au and to Con Karakaltsas for the  watercolour painting from which the cover art work has been adapted.

Hope you love it as much as I do.

Reading about life in a women’s prison in Australia was eye- opening. The writing is wonderful. Check out my latest #bookreview #bookstagram #books #reading📖 #snakesandladders #newrelease #readingtime #booklover #bookwormlife
Some nice street art on my walk today.#walking #streetart